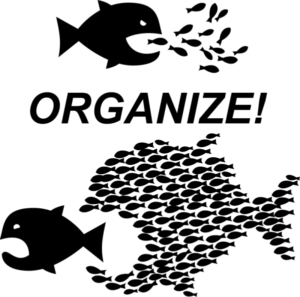 Organizing
Forming a Union at your workplace is the most effective way to have a real voice in your working conditions, wages, and benefits and to improve the standard of living for you and your family.

The union advantage is clear. Organizing more workers strengthens our union and leads to better contracts for our members. Our communities benefit from good jobs with generous compensation. United we are a powerful voice for justice in the workplace. Together we can maintain the high standards that allow workers to prosper across many different industries.

You Are the Union:
In the United Food and Commercial Workers, you are the union. You come together with your coworkers to organize, you nominate and elect union officers, and you determine the working conditions and issues that you want to see bargained with your employer. As a member of the UFCW, you will be part of a larger movement that improves the lives of working men and women in the workplace and in our communities.

The more workers that join together in a workplace, the greater their collective voice will be heard by management. Without a union you have little say over your wages, benefits and working conditions. Without a contract, those things can be changed at your employer’s discretion. With a union, you enjoy numerous wages and benefits guaranteed in a union contract, such as:

5. Protection from unfair treatment and favoritism

7. And a voice on the job to bargain for other benefits

How Do I Get Started?
The first step is to form a committee among the workers with representatives from each department and shift. The committee’s job is to attend meetings and educate themselves about the Union. Then they can educate their co-workers, and help dispel false information spread by management.

Next, employees must sign cards stating they want to be represented by UFCW. After a majority of workers have signed up, the Union can ask the employer to recognize the Union, or file a petition for an election with the National Labor Relations Board (NLRB).

When the Union files for an election, then the employees have a chance to vote for Union representation in a secret ballot election. If the Union wins a majority of votes then the Union can begin the process of negotiating a collective bargaining agreement, also known as a contract.

Why should workers organize?

The reasons vary from person to person, but the most common reason is a basic desire to get a decent wage, health and retirement benefits, and fair treatment at work. Everyone wants more security in their lives and a job in a union workplace can help.

How do workers become unionized?
Workers can become unionized in two basic ways:
The first and most common way in the US today is when a majority of you and your coworkers sign union authorization cards and then take a secret ballot vote to determine if a majority of workers are in favor.
A more quick and fair way is what’s called “card check.” This is when a union is automatically approved after a majority of workers sign cards saying they want a union. Many employers oppose this way for workers to get a union because it is easier for workers and harder for employers to oppose.
Are there protections for workers who want a union?
Yes. Whether or not you support a union in any public or private way is up to you. It is illegal for management to grill anyone about union activity or to threaten, harass, or discriminate against anyone because of union activity. Workers attempting to form a union have legal rights and protections under the National Labor Relations Act.
Your employer cannot legally punish or discriminate against any worker because of union activity. For example:
Your employer cannot threaten to fire, lay off, discipline, harass, transfer, or reassign employees because they support the union
Your employer cannot favor employees who don’t support the union over those who do in promotions, job assignments, wages, hours, enforcement of rules, or any other working condition
Your employer cannot shut down the work site or take away any benefits or privileges employees already enjoy in order to discourage union activity
Your employer cannot promise employees a pay increase, promotion, benefit, or special favor if they oppose the union.
If your employer violates the law, the union can help you file “Unfair Labor Practice” charges with the National Labor Relations Board.

Backed by Federal Courts, the NLRB has the power to stop interfering with employees’ rights, to provide back pay, and to reverse any action taken against workers for union activity.

What type of activities can workers legally do if they want a union?

Attend meetings to discuss joining a union.
Read, distribute, and discuss union literature, as long as you do this in non-work areas during non-work times, such as breaks or lunch hours.
Wear union buttons, T-shirts, stickers, hats, or other items on the job (as long as you would generally be allowed to wear other kinds of buttons, T-Shirts, hats or other such items at work).
Sign a card asking your employer to recognize and bargain with the union.
Sign petitions or file complaints related to wages, hours, working conditions, and other job issues.
Ask other employees to support the union, to sign union cards or petitions, or to file complaints.

Who decides what’s proposed for your contract?

The employees decide. First, you fill out bargaining surveys, meet with a Union staff negotiator to discuss the contract and decide what you want to propose. Next, you elect a negotiating committee of your co-workers to represent you in bargaining alongside the Union staff negotiator. Then, your committee meets with management to bargain the contract.

Local 368A represents approximately 1,200 workers, covered by over 32 contracts. Each one is unique to the place of business it covers. The union negotiates the whole agreement – wages, pensions, medical benefits, and everything else – to best fit the needs of the members who work under it. The result is a written contract that meets your needs and guarantees improvements to your wages, benefits, and working conditions

Is there an initiation fee? How much is membership?

There is no initiation fee for newly-organized members. Local 368A members determine their dues structure and vote on it. Membership is based on wage rates and hours worked. No one pays any dues until you negotiate, review, and vote for your contract. Before paying for any membership, you’ll see the results, and you’ll find what 1,200 Local 368A union employees already know – the benefits of union representation.

What are the workplaces where UFCW 368A members work?

UFCW 368A represents over 1200 workers at 32 locations across Idaho. Members work in many different kinds of workplaces including: grocery stores, food processing, meat processing and dinning halls.

We are a democratic union – meaning our leaders are elected by the members and almost all the Executive Board are members who work in the varied worksites throughout our region – be they grocery, food processing or some other industry. We are a diverse and progressive local union dedicated to advancing the rights and living standards of workers.

What about strikes? Who decides if there is going to be a strike?

Union members do have the legal right to strike. Sometimes employer demands or unfair treatment leave no other alternative. But strikes are very rare. Over 99% of all contracts in the U.S. are settled without a strike.
The Union’s bylaws stipulate that UFCW 368A members may not strike unless a two-thirds majority votes to do so. In any case, the members are the ones who vote on a whether or not to go on strike.

Will being Union provide better job security than not?

Yes. A union contract can provide protection against unfair management decisions to reduce hours, layoff employees, or discipline and/or write up employees without a fair reason.
For example, UFCW 368A’s contracts ensure just cause, which states an employee can only be written up or disciplined for a justifiable reason. If an employee feels they have been disciplined unfairly, UFCW 368A contracts give employees the right to file an official complaint and, if needed, have their case presented to an independent arbitrator. A quick check list for what is covered by just cause includes:
Did the Employer Provide Forewarning?
Was it a Reasonable Rule?
Did the Employer Investigate?
Is the Penalty Appropriate?
Are All Employees Being Treated Equally?
Did the ‘Judge’ find Proof?
Was the Investigation Fair?

What is the main difference in having a union contract?

With a union, you’ll have a written and enforceable contract which spells out and guarantees your rights; a real grievance procedure; job security; guaranteed wage rates; and a timeline for pay increases and benefits. It’s written down in black and white – a legally binding contract that cannot be changed at management’s whim.