The voice of working families in Southern Idaho, Western Wyoming and Eastern Oregon.

This is the website of United Food and Commercial Workers Local 368-A. To learn more about the UFCW outside of Idaho, visit www.ufcw.org. 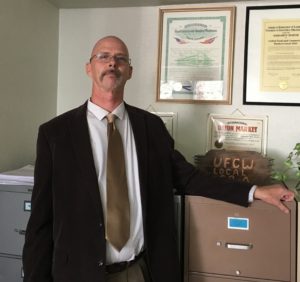 A message from Jack Caldwell, President of UFCW Local 368-A.

With the arrival of 2019 we face a new set of challenges for working people and Local 368-A is prepared for them.

We are thankful for the work our predecessors have done in advancing the rights of hard working men and women across southern Idaho, eastern Oregon, and western Wyoming. The members of Local 368-A are stronger today than they have been before.

The Executive Board is looking forward to continuing that work and to taking every strategic action aimed at solidifying and strengthening our members’ power at the workplace and at the bargaining table. We have grown our membership considerably in the last few months and that will continue to be our number one priority. There is a vast potential for growth within the units with our main employers that can only translate into a better hand during contract negotiations.

In the last contract cycle, we have seen improvements in some of our biggest employers both in retail and food processing. Worker solidarity has been a main factor in getting some of those improvements and therein lies the key to our members’ success.

A change in the national political landscape also means a change in the policies that affect our members in areas such as safety and health, overtime pay, and enforcement of the employees’ rights to organize. That is also a good reason to keep growing our power and be ready to confront those challenges ahead.

We are thankful for the trust you placed on us and are ready to fight for the members of our local.

Together we can and will build a secure future through STRENGTH and SOLIDARITY.

The UFCW is made up of more than 1.3 million people working primarily in grocery, food processing, and meatpacking industries. Together, we are proud to put the food on America’s tables and work together to raise the standards in our industires.
Workers have the right to stick together on the job. Our union contract means we can go to the boss and negotiate the kind of wages, benefits, and safe working conditions we need to raise our kids, to live a decent life, and to retire with dignity. This right to stick together is a basic, fundamental right at the heart of our union and the labor movement.

UFCW Local 368A Executive Board

The Executive Board is made up of member elected rank-and-file UFCW 368A members from diverse workplaces, income levels and backgrounds. The Board meets quarterly to conduct union business and authorize expenditures. The Board functions on the member’s behalf making critical decisions under the guiding principle of doing what is best for current members and strengthening the local union for future generations and retirees